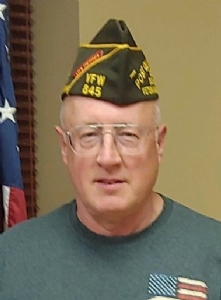 I am married with three adult children.

l was born in 1955 and raised in Exton, PA. After High School and a year of working night crew for a local supermarket, I decided to enlist in the Air Force in 1975.

After eight years with the Security Police, I was recruited into the Air Force Office of Special Investigations (AFOSI) to become a Special Agent. My senior leadership positions held in AFOSI include being a SAC (Special Agent in Charge), Chief of Operating Location, and Superintendent.

I have a Bachelor of Science Degree in Criminal Justice from the University of Maryland, where I graduated with a 3.8 GPA.

I retired from the Air Force in 1997 and joined the West Chester Borough Police Department as a police officer in 1998, where I presently serve.

Prior to being elected to Senior Vice Commander, I served for three years as Post Trustee. The best part of being a member of the VFW is serving the needs of our fellow veterans.