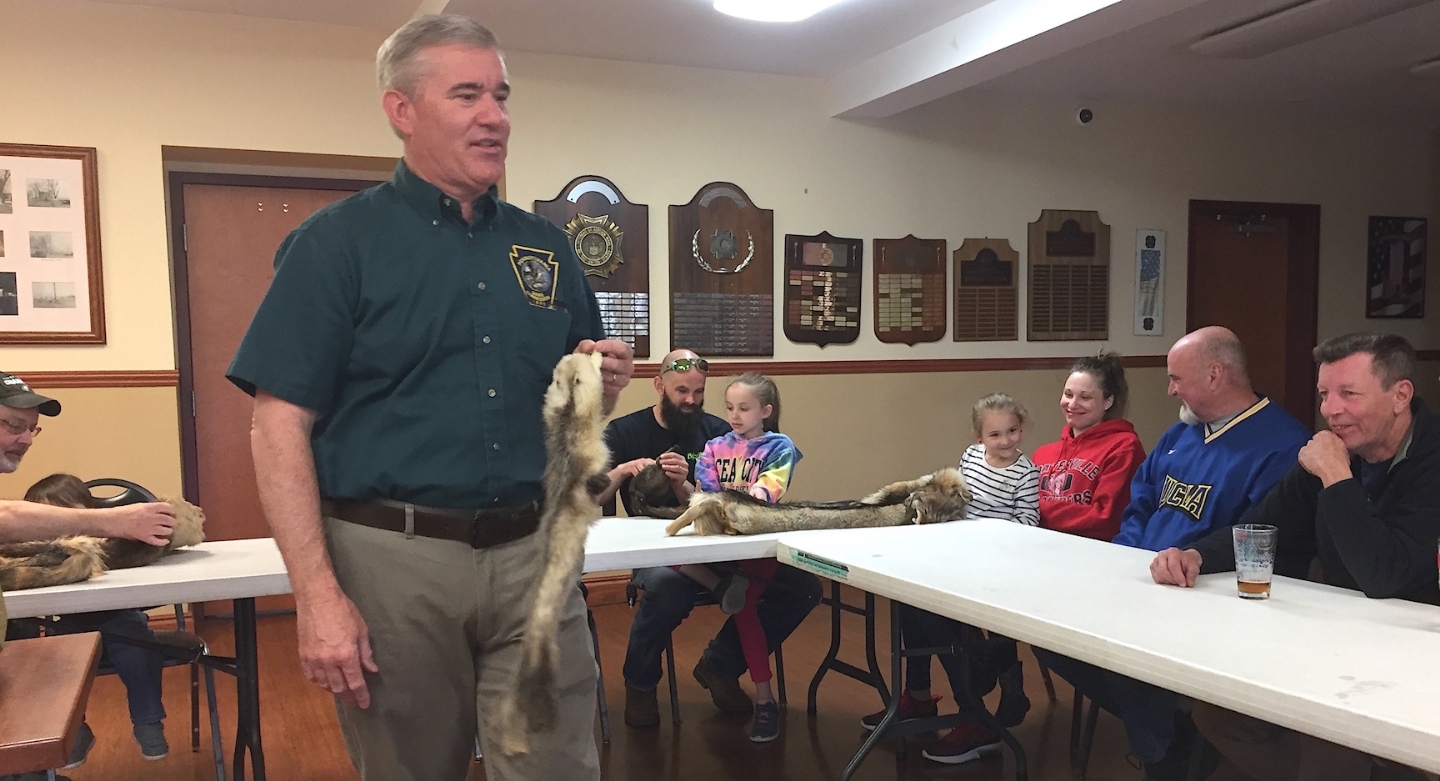 VFW Post 845 hosted wildlife specialist Dan Lynch of the Pennsylvania Game Commission on Sunday, April 28, 2019, at a one-hour presentation to the public about various wild animals. The emphasis was on mammals that live in Pennsylvania and particularly those that live in Chester County.

The meeting was open to the public, but the majority of attendees were Post veterans and their families.

Lynch, a good friend of Post 845 officer Jerry Banks, traps a wide variety of animals and he passed around over a dozen of his personal animal pelts so that the children present could get a good idea of the type of fur each animal has and their approximate size. Included in the pelts he displayed were those of coyote, red fox, grey fox, beaver, weasel, ermine, otter, mink, racoon, deer, rabbit, hare, skunk, opossum, squirrel, fisher, and bear.

The wildlife expert also passed around a skull that was correctly identified by one audience member as that of a black bear. Lynch pointed out that bears have teeth similar to humans with some designed for ripping meat and molars for grinding food. He explained that bears eat all kinds of food but only about 20% or less of their diet is meat. He added that when trying to trap bears for research study, the preferred bait is donuts.

One very young visitor held the bear skull and asked several intelligent questions such as "Where are its ears?”

Another audience member correctly answered Lynch’s question: can you name a marsupial that lives in Pennsylvania? There is only one marsupial (an animal that carries its young in a pouch) that lives outside Australia and it is the opossum. One interesting aspect of the opossum that Lynch offered is that female opossums typically have litters of up to 20 babies, but inside the pouch there are only 13 teats. Babies attach to a teat which swells and permanently attaches to the baby for a period of about two months. Therefore, only 13 babies will be fed and any more will perish.

One post member asked if it is permissible to trap a pest animal such as a raccoon and release it on state game lands far away. The game commission officer said the only animal that may not be relocated legally is a cat.

Lynch talked in some detail about beavers, what they eat, why they build dams, and why early trappers prized their pelts so highly. He also talked about perhaps the worst part of his job – when he was sprayed by skunks. He advised that the best thing to do if one encounters a skunk is not make any sudden movements or high pitched or loud noises. He said talking to a skunk in a normal voice seems to have a calming effect on the animal.

Possibly another wildlife presentation will be scheduled in the future with more publicity and a larger crowd. The presentation is free of charge.