Holiday parties can be a chore for the hostess, especially when a dozen or more guests are invited, so imagine the work load when the guest list tops 200!

Banquet halls routinely handle large crowds but that is their business and they have a kitchen and wait staff large enough to handle it and in the process make a profit.

Downingtown Veterans of Foreign Wars Post 845 has a kitchen staff that routinely handles 50 or so meals a day for their dining patrons, but bumping that number up to 250, all to be served at one time, requires a lot of extra effort.

Shneakqua Buttler of Coatesville, one of the three kitchen staff members at the VFW post, was 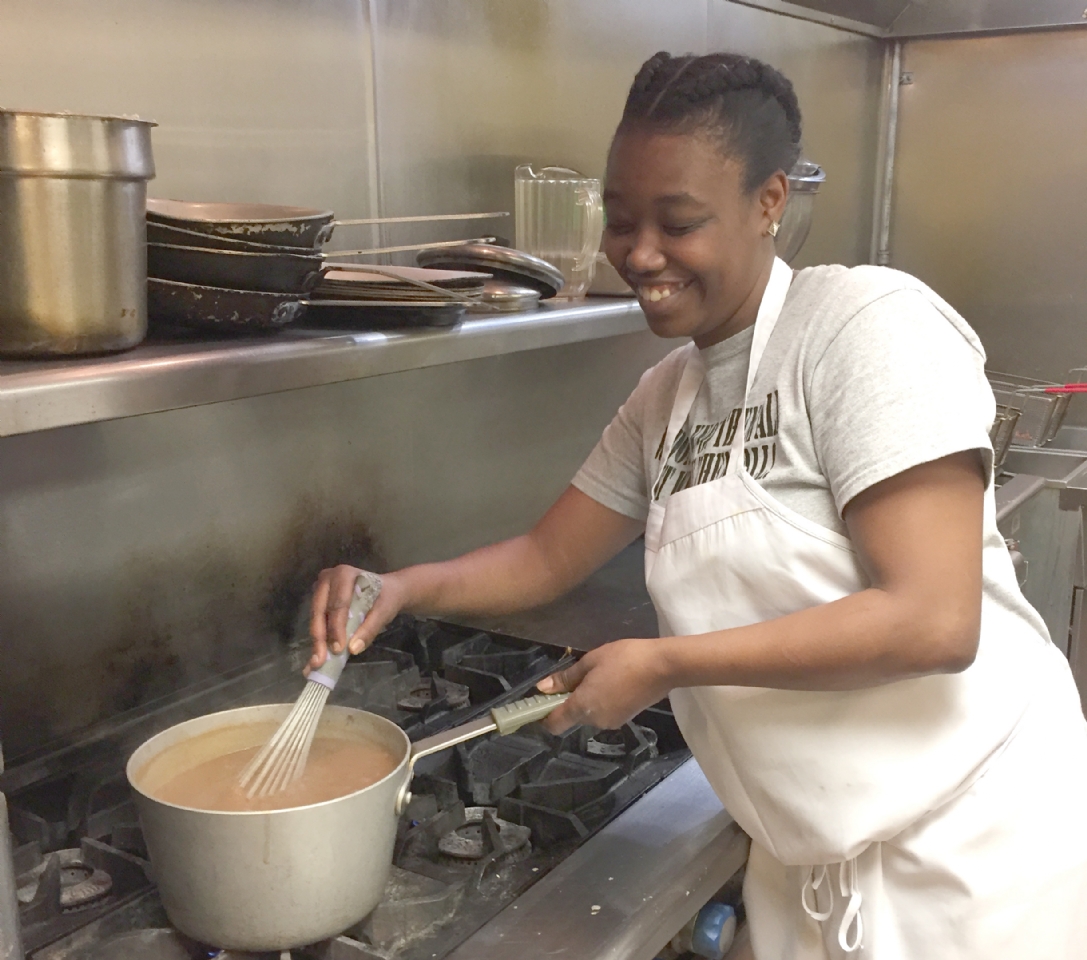 repreparing 8 hams, 10 turkeys, and enough stuffing, mashed potatoes, green beans and rolls to feed up to 250 people. The guests were the soldiers and family members of the closest military unit to the post who were holding their annual Christmas party, members of the PA National Guard who comprise Bravo Company of the 1-111th Infantry Regiment of the 56th Stryker Brigade Combat Team.

In 2009 Bravo Company was activated and deployed to Iraq for a year. At that time Post 845 voted to adopt that particular unit and provide support primarily to the dependents of the deployed soldiers. Each year since that adoption, the more senior veterans of the VFW devote time, effort, and money for the benefit of their younger comrades who fill the shoes of those who once served in a foreign war.

Saturday, December 1, most of the 120 current members of Bravo Company put on their dress uniforms to attend the party along with family members or girlfriends. Several non-commissioned officers said they appreciated being honored by the VFW because it made them feel special. Several indicated that they enjoyed wearing their dress uniforms because it was a change from the army camouflage fatigues normally worn on the weekend drills.

It has been almost 10 years since the reserve unit was called to active duty for an extended period of time, but in recent years Bravo Company has been charged with maintaining exceptional readiness and has undergone extra training that required more than the usual two-days-a month-drills. There have been several 4, 5, and 6-day drill periods during the past year and one 30-day training period at Fort Irwin National Training Center in California’s Mojave Desert. The unit is now preparing for an extended deployment for training in the Sahara Desert next summer.

The extra training days for the citizen-soldiers often poses problems for their civilian jobs. Most employers are supportive of their employees, but unplanned deployments or extra duty training missions can be difficult to handle.

This was the second time that chef Shneakqua prepared a Christmas party meal for the reservists.  he claimed that it was easier this year due to previous lessons learned. Still, it took her most of the previous week to prepare and she had to start her cooking on Saturday at 7:30 a.m. instead of her normal start time of 11:00. The cooked food was transported from the VFW Post to Bravo Company’s armory near the Coatesville Airport on Waverly Boulevard. Former Army Special Forces veterans Jack McFadden and Eric Welke transported the meals to the armory and helped serve the guardsmen. The party started at noon and the serving ended around 1 p.m.

Post 845 donates thousands of dollars to various veteran organizations, fire companies, police departments, and other charitable organizations like the Lord’s Pantry, and Downingtown Area Senior Center. The post is open to non-veterans through a social membership and generates income through membership dues, food and beverage sales, and small games of chance.

In addition to helping other veterans, post members volunteer their time to participate in flag ceremonies and rendering military honors at funeral ceremonies for deceased veterans.